Have you ever had that feeling when you are alone that you feel there is someone watching you?  Sometimes you may even hear or think you hear something. Zoologists would explain it as those primeval nerves and peripheral senses that once protected early humans when they first came down from the trees. These can in part explain the supernatural and superstitions many of us believe in.  However, sometimes we see things that are not so easy to explain.

Our pets are our companions and they invest so much emotion in us as we do in them.   They can be our constant companions, and they miss us when we are gone, and get so excited and happy when we return.  It is not surprising that when they pass on they can leave ripples in the atmosphere, emotional recording so to speak.

Sally was our first greyhound and she was a wonderful character, so popular, and was loved by many people.  She was particularly close to my Mum.  Sal had arrived only a month after my Mum’s best friend had passed away and in many ways she filled that need for friendship that had been created.  The routine of dog-sitting on a Tuesday and Thursday became important in helping my Mum through the grieving process and getting her back in the swing.  Sally was so very affectionate and she and I became inseparable; wherever I went, so did Sally.  She would wait patiently for me to come home from work or, on a Thursday, for 2 o’clock when my Mum would arrive with a milky way and let her out the garden.  If I worked upstairs on the pc, Sal would lie at my feet, often so close to the chair that I had to watch that I did not roll over her ears with the castors.  When my appendix burst, I spent 2 months off at home with her and we had some real quality time together.  Then, two years later when I broke my leg whilst walking her, I had three months at home with her.  At this time Armelle still worked 4 days a week so Sally and I were literally on our own from morning to tea-time.  It was great being with her, and on days when I was depressed or worried, she was there to sit and listen to me, not complaining or offering any reproach.  When Sally headed towards 13, Armelle was off work for a while, and I also as I had had the metal plates taken out of my leg, so we again had some quality time together.  Fate had given the three of us a month together, and it was only a few days after we both returned to work that on a Tuesday evening she was taken ill and in the early morning passed away.  I was in the room with her at the time. 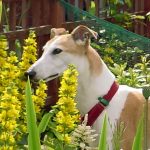 Sally our first hound in the house

It was a year or so before we had Sammy, our next greyhound.  She was very sensitive soul herself, and within a few weeks had also grown very close to my mum.  We had only had her a few months when she started a very strange habit; she would sit or lie down and look into space, about 18 inches up, as if listening intently.  She would not just stare blindly but she was really watching something (or someone).  You could read her facial expressions as she would (usually) lie there looking and listening.  Jokingly I said she was listening to orders from The White Dog – our Sally.  This went on all the time we had Sammy.

Sammy grew close to our next door neighbour Betty.   Sammy began to stop by her garden gate to go and see her.  We found out that Betty had become very ill with cancer, and Sammy seemed to realise this and became more and more insistent that Armelle should call.  She would go in and sit at Betty’s feet and watch over her, and she would wait patiently as Betty fussed her.  In the September we were going on holiday and the day before we left, Sam as had become usual, insisted on seeing Betty.  They sat with each other, and as Armelle made to leave, Betty spoke to Sam, telling her that they would probably not meet again.  Sam had to be practically dragged out of the house – she even sat down in the hallway and refused to go.   True enough, Betty passed away when we were on holidays, they never did see each other again.  When we came home, Sam would walk past the gate, but never stopped to call in; she knew Betty had gone.

We did not have Sammy two years when she was attacked by another dog and, despite an emergency operation, she died at the vets.  It was a horrible death, and she was so young – it was the week of her fifth birthday – and it seemed to me that she had never had a chance to live a full and proper life.  She had been cheated.

I’ve never believed in ghoulies or ghosties, or things that go bump in the night, nor am I particularly superstitious.  However, I have had to change my opinion over the last few years.  It must have been about six months after Sammy died that I was in the kitchen and as I turned towards the fridge freezer I saw a black shape pass from the kitchen into the utility room; I thought it was a black greyhound.  I went out into the utility room – but there was no-one there.  I put it all down to my imagination.  A few months later I was in the downstairs cloakroom early in the morning as I was getting ready for work.  The door was slightly ajar and as I turned to stand up I saw a small black greyhound trot past the door.  I opened the door wide – again there was no-one there.  I began to believe that for some reason Sam was still about, and keeping an eye on us, as Sally had kept an eye on her.  We had no dog at that time as we were in between hounds, but even since Penny has arrived I have still occasionally seen Sam.  It is usually in the kitchen or utility room, never upstairs, and always just a fleeting glance not a good view, and always unexpected.  It has never felt frightening or spooky, just unusual.  I have sometimes even felt her brush against me.

Since mentioning this, a number of other pet owners have talked of seeing their pets after they have passed on; they have seen them, heard them and even smelt them.  Why does it happen to some and not to others?  I would suggest that in Sam’s case, she was so young that she still wants to share some time with us and is not ready to go yet.  She has only once seemed to talk to Penny.  Armelle has never seen her (or not admitted it!).  Sal was so very close to me yet I have never seen her – why has she not made an appearance?  I guess we’ll never know.

At the end of the day, I find it quite comforting to think that Sam is looking over us, and even that it seems to reaffirm the idea of life after death.  As Hamlet said, there are more things in heaven and earth…. 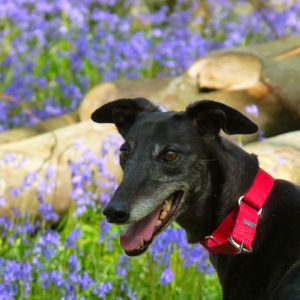 Sammy in the bluebell wood