Here’s Our Latest Posting in the South Wales Evening Post 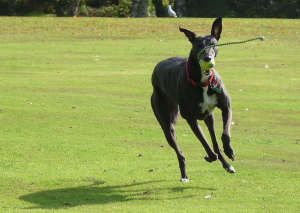 You can teach a greyhound to retrieve!

When the Crafty Dog wagon takes to the road with our jams, chutneys, glassware or books and people come to meet us at Craft Fairs, or at Book Readings they see Penny and see what a well-rounded hound she is, calm, gentle and polite. Some of this is down to our work with her in terms of training, both house-wise and obedience training. However, a large part is down to her breeding and some to her own nature.

Greyhounds are generally easy-going and gentle by nature. They are pack animals, and love being part of a family. They bond well and once you have a connection they will walk over hot coals for you! They are very independent minded, so to train them you really have to make them see the benefit of what you are asking them to do – they are very reward driven. You’ll never train them easily by force but with a bag full of chopped up frankfurters you can get a greyhound to tapdance!

Penny and Sam had neither of them been in a house before, so simple things like stairs were major hurdles. Sammy went up and down within a day or so and could find her way around the house. Penny ran up the stairs on the second day with us but was terrified about getting back down. We had to walk her down, me guiding her front legs and Armelle her back legs. The next day we started to teach her, building her confidence slowly. A piece of sausage on each step and she came down, tenderly, picking her way, treat by treat and step by step. The next time it was a treat every other step, then every third step, fourth step until only one treat on the bottom step. By the end of the week she was going up and down like a natural.

She had to learn a routine, starting with toilet first thing, breakfast, a walk, then me off to work. Penny soon got the hang of all of that, especially the breakfast bit. She had the same cornflakes and yoghurt that Sammy and Sally had. After breakfast it was walkies around the cricket pitch and then back home. I then went off to work leaving Penny in the kitchen until Armelle came downstairs for breakfast.

In the evening, I would come home from work, we would all have tea then afterwards go to visit my 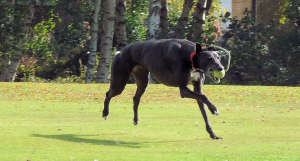 Mum in the local nursing home. Within a few weeks Penny got set into the routine so much that at 6.45 in the evening Penny would get excited as she knew it was time to go to the Home and if we weren’t ready in time she would start to bark at us. Once home, Penny began by sleeping in the kitchen but after a few weeks she started to scratch the kitchen door, so she moved to sleeping on her bed in the living room. That was fine but after a few weeks more she wanted to sleep on the settee on her blanket; she was such a well-behaved girl we gave her a fair bit of leeway. She was no bother at all. However, after taking her to Belgium and sharing a double bed in the motorhome she decided that she did not want to sleep on her own anymore so we now share a double bed with a greyhound every night. Fine except for when she breaks wind, or decides to run in her sleep and you end up being pummelled by her feet or wagging tail.

Penny has set up other little routines as the months rolled past; if the weather was wet, she would run straight back to bed after breakfast. Tea time (originally 5p.m. like Sal’s) began to creep forward until it merged with Armelle’s crusts after lunch. Now she gets a small lunch dinner time and her main meal with us teatime.

Penny has her foibles too – many rescue dogs have some demons. When we first had her she would freeze when walking onto the cricket pitch, a result of being abandoned in a field I guessed. Two weeks after she arrived it was Guy Fawkes night and as we walked into the Nursing Home a rocket went off about twenty feet over our heads. Penny was terrified and has been scared of thunder and fireworks ever since (maybe even before). Loud noises send her to her cwtch, an area behind my chair where she feels secure.

Recently she has become frightened of rain on the roof of the motorhome, a result of being caught on a campsite in a terrible thunder storm. She now associates noise on the roof with rain, which to her then means a thunderstorm is coming. She gets herself really wound up, not aggressive at all, just panting and shaking and there’s no room for a “den” in a 20 foot motorhome! It was so bad on our last trip that she even went off her food – unheard of for Penny. So, we are now going to have to go back to basics to break her cycle of fear of the van. We will start by building up positives; short trips to the park with a nice walk at the end, feed her in the van, get her used to the van without any rain noises. Then, gradually, start introducing a recording of rain noise, quietly at first, and slowly increase the volume over time. Again, this is not a quick fix and it will take a while and though there will undoubtedly be some hiccoughs we’ll get there. In the meantime we have calmex, and Valium in case the calmex does not work. And this week its Guy Fawkes Night – oh joy of joys!

It’s like everything in life, if you want anything to be perfect you have to put the time and effort in. Penny can be fixed, like we got Sam used to travelling. Though the Vet has given us some medication as a backup there’s no substitute for work, patience and lots of cwtches along the way! At the end of the day, our little hound is worth every penny!.

PS – By the way, I forgot to mention that this week was Penny’s Second “Gotcha” Day, the second anniversary of us bringing her home. 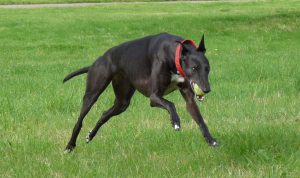