Getting it write – how a Rescued Greyhound escaped into print.

Owning a rescued greyhound and being involved with greyhound rescue has been a wonderful experience over the years. We have had many strange adventures, such as trying to explain to a German couple in Bruges, in French, that Penny was not Spanish but Irish though now lived in Wales, or walking around a golf course in the middle of the night with a greyhound who wants to go to the loo but only in the right place – wherever she decides that is going to be.

I was asked ages ago to write a piece about tips and hints and lessons learned living with our hound – I think it was still our first greyhound, Sally, at that time. So, I wrote a short article in the Greyhound Rescue Wales magazine which went down very well. As time went by, I was asked whether I was going to write another piece and someone else suggested a short story. By now we had fostered some dogs and had gained even more insights into greyhound life, especially of slightly more broken ones. I scribbled a bit but nothing much as life was a bit hectic at that time.

It was Sammy’s accident that really galvanised me into writing, as I wanted people to know all about her and hopefully make people learn the lesson from her accident to prevent it happening to another dog. It was a bit cathartic too, helping the grieving process by running it through my mind and putting it on paper. Within a period of a few months I had a first draft of what was now much bigger than an article, or even a pamphlet; it was a book.

What to do next then? We decided that we needed to get it published but that was going to cost a chunk of money. Casting round for alternatives, someone suggested putting out an e-book – great idea, no print costs, and it was immediate. I did some research and decided on a format (there are so many out there, each having different outlets such as Apple, or Amazon, or Barnes & Noble). Formatting was fairly easy, starting with a word document and then adding in the paragraph settings, auto-numbering, table of contents etc. This took longer than envisaged but you have to remember that first impressions count – who’s going to want to buy a scruffy looking book with awful spelling and out of focus pictures. I even designed the cover. Pitfall number one – when I tried to get it uploaded the platform was decidedly not user friendly. I tried to contact the on-line help but they always e-mailed me back in the middle of the night which was a consequence of picking a host based in the USA. I grew increasingly frustrated and so switched to another host – this time Kindle. It was very easy as I had done the bulk of formatting for the other company, and it was up and running on-line in no time. A Hound in the House was available to buy.

Pitfall number two; how do you market a virtual book that does not exist. Facebook helped but it was very difficult to promote. There are not that many outlets/notice boards, and most are full of other people promoting their own e-books. Undeterred, I waited for the money to roll in. It did, a bit, slowly. The Evening Post came up and interviewed Armelle and I and took some pictures and it appeared in the paper, which generated more interest. I now had requests to give a talk about the book and life with rescued greyhounds.
Penny, Armelle and I went along to a Library where I spoke to the audience about the history of greyhounds, greyhound racing and what happened to them after their racing days. Penny enjoyed all of this as she was always given a fuss and usually some biscuits too. It was really great to speak to people who were interested (otherwise they would not have been there). However, when they asked to see a copy of the book it was a always a bit of an anti-climax to say it was only available as an e-book. There was such an interest in a printed copy that we decided it was time to bite the bullet and publish it.

At one of the libraries we met Chris Thomas, who had been a publisher himself. He came round to the house to give us advice on what we needed to do and, on hearing I had once worked in a print unit for a local authority, said, “You know about design, formatting and layouts, and about dealing with printers – why not publish it yourself? It had never crossed our minds. We reset the book to book size and sent off to printers and got some prices back – some quotes were very expensive, as for a small print run the cost of printing plates was frightening. Academic printers offered incredible quality, with lovely bound finishes but were not really what we wanted for a paperback. Instead we had a price from a digital printing company and, after seeing an example of their work we decided that was the route to go down.

We had met an artist at a craft fair and she agreed to do some illustrations for the front and back pages and I redesigned the cover accordingly. Feeling really pleased, we sent off the artwork and the text and sat back, waiting for the finished books to arrive; when would the Hound make it to the house? 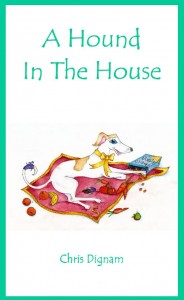 A Hound in the House

I remember rushing home from work in my lunch hour to rip open a box and see my hard work finally in print. It was a wonderful feeling, to hold that book, open the pages and see the photos. There I sat, surrounded by 500 copies of my very first book. Now what? A friend of mine had told me that writing is hard, printing is easy but the hardest part of all is marketing your book. Armelle and I had to figure out how we could distribute the book and how long it would be before we would make any money back!