Many people have asked for information about the author of the Hound in the House and Largest Rabbit books, so Chris has added this little biography.

Chris Dignam grew up in a happy family home in Swansea, South Wales with his Mam, Dad and a Shetland sheepdog called Shandy. His was a typical Welsh family, though there were (by that generation) no miners and no-one played rugby. Maybe the stereotype failed because his Dad was half Irish. However, they were all short, including the dog. 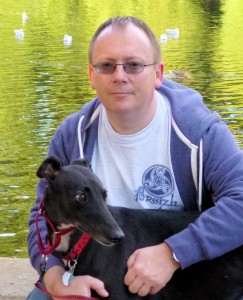 After escaping from school he went to Aberystwyth University where life was like a Malcolm Pryce novel, only a brief one as he moved back to Swansea University at the end of his first year (but that’s another story).

Chris graduated in History and worked for 2 years as a photographer and historical researcher for the National Trust, then happened by coincidence into a Tourism job for the Council. After a 10 year stint as an Emergency Planning Officer (which was apparently even more bizarre than any Malcolm Pryce novel) he wandered back into Culture and Tourism.

In 2018 he was lucky enough to escape the local authority to make jam, paint glass and (occasionally!) write full time.  At last he considers he has a proper work-life balance and only a 30 second commute to his office at home.

He has always enjoyed writing since very young, and has written academic articles in History journals and books (most notably the Dictionary of Welsh Biography 1940-71, NLW Press) and was even Secretary of the county history society for a couple of years. His influences are many and varied, from Jules Verne to Terry Pratchett and the aforementioned Malcolm Pryce, to Paul Sussman and even Edgar Allan Poe. Despite being a Dignam he has never read all of “Ulysses” though he has tried; along with “Moby Dick” it is a book he has promised to read properly when he gets a chance.

“A Hound in the House” was Chris’s first venture into what he considers to be “proper literature” albeit not quite James Joyce. Yet.

Driving home from work one day the idea for The Largest Rabbit appeared and within a few days the character of Rubbish the rabbit hound had emerged with his pals from the Warren. He had never considered writing for children but the book has proved so successful, and the readings at schools and libraries so very popular. Chris has said that reading to a class of expectant children, faces wrapt with awe, is the very best thing that you can do. Penny the greyhound usually comes along too and helps to demonstrate how good they are with children and families.

Living in Clydach, north of Swansea in South Wales, he is married to Armelle and together they started a craft business, branched out into jams and chutneys and then started Crafty Dog Books Cymru. When not helping out with the glass-painting or stirring marmalade or walking Penny their rescued Greyhound he tries to find time to write (and there’s the full-time job as well).

The life of Penny, their greyhound, provided the material for his fourth book, (Found a Penny) which tells of her life from birth to track, to abandonment and then her new life as The Crafty Dog, all in her own words. 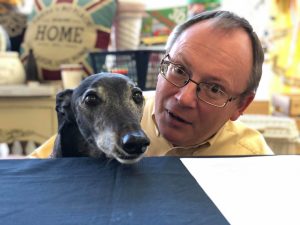 Penny and Chris at her Book Launch

He was approached to write a weekly blog for the South Wales Evening Post about greyhounds, crafty dogs and jammin’.  This is after all the same newspaper that Dylan Thomas wrote for many years ago, but Dylan was never digital.

His loves are his wife and rescued greyhounds (though he says not necessarily in that order!), and music. And writing. And doing readings and signings. And holidays in the motorhome. Maybe that’s his favourite. This is his great dilemma; being a Celtic soul, he wonders whether he loves too much…