The arms of Owain Glyndwr borne by a Welsh Dragon.  Lined in gold liner.  Hand-painted and baked to be dishwasher safe.

This lovely tankard is the Welsh Dragon carrying a flag which bears the arms of Owain Glyndwr, the last Welsh Prince.  Descended from the Welsh Kings of Deheubarth (South West Wales) and Powys (Mid Wales), Glyndwr was a member of the Welsh gentry (uchelwyr).  He led the last revolt against English rule from 1400 until he disappeared into the mists of time after 1410.  He was never found, and is rumoured to have died in his daughters home in Herefordshire.

It is a lovely tankard, hand-painted and baked to make the image dishwasher proof (though we would always recommend hand washing).  An individual piece of Welsh History! 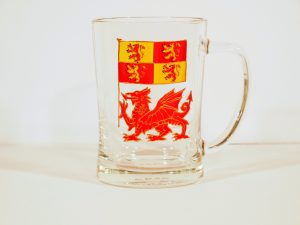