The Largest Rabbit is selling so well that the initial print run is coming close to running out.  If anyone wants a signed First Edition, you had better order it soon as we are down to the last couple of boxes.

Since we took the initial pre-orders at Easter and then launched the book at the Greyhound Rescue Wales “Last Hope” walk at Brynbach Park on the 4th May sales have been really strong.  The story has appealed to so many peoiple and though it’s a children’s book adults are also reading and enjoyinh it.  Copies have been sold across the world, from as far afield as San Francisco in the USA and Queensland in Australia. 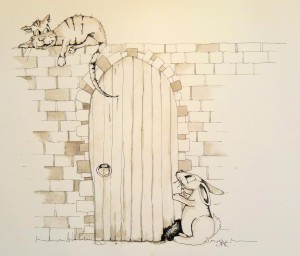 Jeffrey sitting atop the wall.

When the brown sack flew over the Rabbits’ heads they could not imagine what or who was inside. Out came a very strange looking young rabbit with long legs and a funny tail. He said his name was Rubbish.

This is the story of how Rubbish discovered that it’s not what you are but who you are that is important.

Along with the other rabbits, meet the incredible huge and hairy Finn, the Scottish Deerhound who lives in his secret garden, and his friend Jeffrey the brave though gummy, balding ancient and creaky marmalade cat. Together the three four-legged musketeers help Rubbish find out who he really is.

But unknown to them all, out there in the deepest and darkest part of the woods something wicked is stirring. Only Rubbish and his friends can protect the Rabbits.

But will they make it in time…