Santa Claus has crashed the sleigh; he is injured, as are some of the reindeer (including Rudolph) and the 2 helpers. Luckily he has been found by Rubbish the Rabbit Hound who fetched Finn, the Maid and the Butler, along with Jeffrey the ancient marmalade cat and together they rescued him and the rest of his crew. Now they are sitting with Finn and the family in the house and wondering what to do next.  Is he well enough to fly?  Will the rest of the reindeer be able to cope with two less deer? 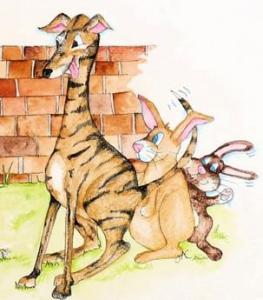 Santa lay on the settee and waited patiently as Kath took a scissors and cut up the length of his trousers to check on the damage to the broken leg. He grumbled that they were his best work trousers and he’d had them for 200 years or so. Where the Maid had expected to see blood and broken bone there was really bad bruising but any break was already healing. Santa smiled at the look of confusion on her face, “Its magic! I heal quickly. The bone will fix itself in a few days but the bruising and muscle damage will take a bit longer.”
Happy was sitting with his arm bandaged and Trevor with binding round his chest.
“You really do need a doctor,” Kath chided him.
“And how do I explain all this?” Santa asked, pointing to the two elves and the reindeer with a bloody nose who leaned in from the kitchen.
“It’ll be ok.” Santa added.
The elf shook his head, “I’m not so sure. 2 days to go and things are not ok. Rudolph can’t lead with his nose in plasters, Trevor has broken ribs, I have a dislocated shoulder and Blitzen is not able to pull. You really aren’t up to it either.”
Santa made to speak but Happy interrupted him, “No Santa, I insist. You are not up to it. You can heal magically but even you will not be ready.”
The Butler, Maid, Finn and Rubbish were sitting around the room, warming themselves by the fire and with mugs/bowls of warm milk. As they sat there looking at the gloomy Santa the realisation hit them. If there was no Santa there would be no Christmas.
Finn looked at Santa, “Do you have a backup plan?”
Happy tutted and Santa shook his head slowly.
The room was silent apart from the crackle of the wood burning in the fire and the loud tick of the wall clock.
There was a loud grumbling sound; everyone turned to look at Finn. “My apologies, its past my supper time,” the deerhound said, sheepishly. That seemed to break the tension that had been building.
“Ok,” Kath the Maid pronounced, “What do we have, and what do we need for a successful sleigh flight for Christmas, and how can we overcome any problems.”
“Five reindeer required, one of them leading and one of the front steering, these are the ones not available.” Happy replied.
“Hmm,” muttered Santa.
“One Santa Claus,” added Trevor, squeakily.
“One Santa Nav,” Blitzen chimed in.
“A sleigh,” added Santa.
“I might have an idea,” Santa said. They all turned to look at him expectantly.
“Finn, you’re a big strong lad – could you take a reindeers place?”
Finn nodded slowly.
“We need someone to lead,” Happy droned.
Rubbish disappeared out the kitchen, then came back with the flashing collar he had been given for his birthday, “I could do that!”
“Who can navigate?” asked Blitzen.
“Ahum,” an educated voice called from the doorway, “I have just been given a new atlas. How appropriate,” Jeffrey replied. He stood holding a large atlas of the world which he flourished unsteadily.
“The sleigh is flyable, just don’t take any chances,” Happy scowled.
“But we can’t fly,” Finn said. It was a small point but an important one, the deerhound thought.
“Oh,” came the replies from Sam the Butler, Kath the Maid and Rubbish the Rabbit hound.
Jeffrey tutted. “Haven’t any of you realised, Ladies, Gentlemen and Rubbish, that reindeer can’t fly either.”
They had not thought of that.
“Explain to them, Father Christmas, how it all works” Jeffrey asked.
Santa smiled. “It’s magic, of course. There’s no reason why Finn and Rubbish can’t fly as well.”
Rubbish looked at Finn and they both grinned at each other.
“But what about Santa?” asked Trevor.
“I’ll be..” Santa started but Happy looked over and shook his head.
“I’ll do it,” the Butler called. Kath laughed, “You’ll need some cushions up your jumper!”
“But not many,” Jeffrey giggled. The others joined in and Sam did too.
“This is all going very well but you realise that you’ll never get Sam down the chimney. And you won’t be able to get any elves in time.” Happy was actually not happy about this.
“I know who can do it,” Rubbish jumped up. “I know just the right guys to help!”

“Wow! Yes, we’ll do it! That’s fab!” Scutter beamed.
“Yes please!” shouted Brownie and Scamp. The Rabbits had been amazed when they had heard the story about Santa. Bluebell and Bob were a bit wary, and Bob had even told Bluebell about Rubbish’s tall stories, but it was the cheerful (not!) elf that had convinced them.
“One question,” a little voice piped up. It was Brownie.
Happy scowled, “Yes?”
“Getting down the chimney will be easy. But how do we get back up?”
Happy grinned back, “You’ll find out tomorrow!” 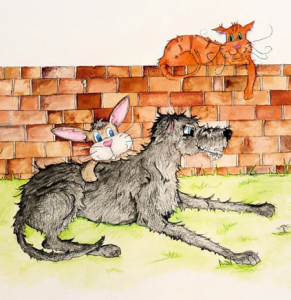 “Engage cloaking device,” shouted Santa Sam. They had all forgotten that as it was daylight they might have been seen. Brownie looked to her left and there was a blue lever with “cloak” written on it. As she pulled it the sleigh shimmered and vanished. They were invisible to everyone, even the people below who now looked up to see what the commotion was above their heads. Rubbish led them through the snowy streets, above the people shopping below, and the cars and lorries delivering stuff to the shops that the people were then taking home.
“Ready for a test landing, old boy?” Jeffrey called out. They were out of the town buy now and there was a large redbrick and stone house ahead in a centre of a field of thick snow.
“Test landing,” they shouted down the line to Finn and Rubbish. The greyhound slowed and swung the sleigh around and downwards. There was a large flat roof at the back and it was here they decided to land. Down they flew, until they were at the same height. They approached, slowing as they did. “Careful not to overshoot,” called Santa Sam.
Donner and the reindeer shook their heads, “Don’t worry, Prancer called, “We’ve done this a few times before. You lot follow us!”
The sleigh clipped the edge of the roof and within a few yards, drew to a halt.
“Wow! That was amazing,” Scutter laughed. The others looked equally pleased by the test so far.
“Brilliant,” Brownie agreed.
“Absolutely fantastic,” the rounded tones of Jeffrey could be heard though he could not be seen. In the sudden stop he had slid out of his seat and was lying under the rug on which the rabbits had been sitting. He climbed out and straightened his flying helmet.
“Don’t forget your seatbelt.” Prancer bellowed to him.
Finn stood on the roof, his thick grey shaggy coat blowing in the gentle breeze. He felt as young as a puppy again. He had not had such an exciting time for a long time, even considering his adventures with Rubbish and the others.
“Right,” Santa Sam called out, “Time to practice a chimney.”
To their left was a large brick chimney, about four feet high. Sam and the rabbits moved over to it and looked inside.
“Will I get down there?” he asked. Even as a slimmer Santa he had real doubts he would fit.
Prancer came over and looked. “Hmmm, with modern central heating we don’t do many chimneys any more. He relies on a few elves and gnomes. In this case, the rabbits.”
The rabbits all stood to attention and saluted Santa. “Ready for action, sir,” Scutter announced.
From the back of the sleigh a long arm stretched out – it was a crane! It swung over the chimney. The rope lowered to rabbit height and hooked onto the harness. One by one the crane swung them over the chimney and lowered the rabbits down.
Scutter unhitched himself and, after looking carefully out of the hearth, he stepped onto the mat in front of the fireplace. It was a large room, nicely furnished, with a large TV and lots of Christmas cards and a vast settee and chairs. He knew what they were as he’d seen them in Finn’s house. One by one the other rabbits arrived. They had a look around the room, then made their way back to the fireplace. One by one they went back up the chimney.
Just after the last rabbit disappeared the door of the room opened and in came the lady of the house. She had just dusted and put the vacuum cleaner away. She looked at the white rug in front of the fire and gasped – it was covered in black sooty foot prints. She looked again. They looked like rabbit prints?

Back up on the roof everyone climbed into the sleigh, did the pre-flight checks and then took off for the journey home Within a few minutes they were circling Sam’s house and they could see the tiny figures of Santa, the Maid and the reindeer below. Down they swooped, over the garden wall and then slithered to a halt in front of the expectant ground crew.

Keep your eyes out for Part 3 next week;

They can fly the sleigh, but how will they cope on the big night?

Will Jeffrey’s map-reading be good enough to find every house?

Or any house at all?

Will Christmas still happen as planned?

If you want to read more about Rubbish the Rabbit Hound, and how he became the Largest Rabbit, look out for the book “The Largest Rabbit” available from the Crafty-Dog-Cymru.co.uk website.